My direction of travel was clear after the Winter Cabaret exhibition, meaning production at a larger scale had to be done. Fortunately, the construction and layout of studio 4 offer a handful of ideas to work with. Originally, the stretcher was made to fit inside triangle beams but because of lack of equipment, health & safety concerns it couldn’t be done. The outcome changes the original intent completely. If the painting was to fit neatly inside, it would’ve become a mural that serves a different purpose.

After seeing Bridget Riley’s exhibition at the Hayward Gallery, it came to realisation that there are other methods of presenting a painting. Because the Winter Cabaret was an opportunity to experiment with something I’ve never done before, I decided to examine how my paintings can fit into the space and display them in a more unconventional way. The installation is a combination of paintings on different surfaces. Segments are drawn directly onto the wall, MDF sheets and canvas. Previously I have hung the yellow painting horizontally at eye level but the result is no where near as dynamic as hanging it on the top of the wall. Combined with the 3D effect from the polystyrene cone inserted underneath, it generates an attention centerpoint. 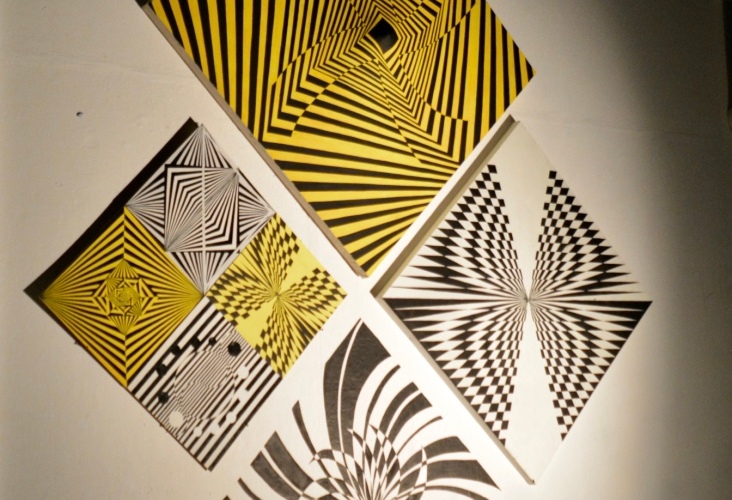 An attempt to use the lightest grey possible in such manner that white can still be seen. Despite that the shade of grey in both paintings are the same, it is harder to distinguish in Grey Lines (four triangles in the corners and the line going across is grey). As a result, this shows how important the shade white is when incorporating it with other colours/shades.

My focus is on painting, drawing and image production. The particular range of interest is in perception and the communication between images and spectators. I believe that a picture is not just a reflection in our cognition but there is a gap in perception. If it is a reflection, illusions can’t change as time goes by observing the work.

My work investigates composition and how certain formal arrangements combined with specific colours, layers can create illusion. The intention is to confuse the viewer’s eyes and ignite their perception. The communication space between the viewer and the painting is crucial because if there was none, the work would cease to exist. Painting after painting, the illusions become more refined and restricted in the sense of colour palette and geometrical forms. For instance, the content of the painting is lines, but the context is what I made of it, the patterns and illusions that were drawn from one single shape itself (for example see “The Red Stripe” 2019). In a way, the more I limit myself regarding shapes and colours, the more creative I can be. This deprivation of liberty sets out how my practice persists. Not only that, intentions are also set to examine the borderline between painting and design. By painting patterns that can be accomplished effortlessly on a software, I am discovering the uniqueness of hand painted strokes, details that can only be produced by physical human interaction.

Originally, my journey began with the intent to create paintings that give off the appearance of mass mechanical production with disorientating effects of Op Art designs. When building on that interest in optical illusions, I came upon Bridget Riley’s early group of work that seem to dazzle viewers to an extent that it stops you looking at the work. Consequently, this has brought my practice to question the idea of looking. For instance, artwork “Yellow Spiral” 2019 (Shades of Yellow) where I inserted a polystyrene cone underneath the stretcher to experiment with perspective.

Initially, one of the key points to convey in my practice was the exploration of ubiquitous, simple materials and the creations from them. For the Winter Cabaret 2019 exhibition, my intention was to develop illusionary effects by experimenting with both installation and a range of materials used. The production varies from different surfaces such as wood sheets, canvas to walls. Each surface was displayed to show the difference in effects of dissimilar materials and the dynamic that comes from the height it is installed. From this show it became apparent that the height and ways to install a painting create significant difference to how the work is viewed.

Following this exhibition, I realised the limitation of the building’s height and construction. As mentioned above in a personal perspective, restrictions generate creativity. For the subsequent Interim 2020 exhibition, I was interested in experimenting the ways in which a painting’s design and lines within the design coordinated with the architectural features of the building. The interaction between the painting and space it is installed in became a prominent factor in my work. Accordingly, the degree show would be an extension of these ideas by producing large scale paintings stretching from floor to ceiling, mimicking the studio four space. This integration of architecture and art is heavily influenced by Vasarely. His philosophy was to appreciate the practicality of the work more than its conceptual discipline. By removing art from its usual context (galleries/museums/exhibitions), its intellectual connotations would be stripped away. The ordinary visual effects of his work on buildings would appear the same to any person passing by.

My practice questions the controversy which arise in Riley’s work that suggested artists work on illusionary paintings for spectators to look at even though its bewildering effects are disturbing and stops them looking at it. In a way, a painting is considered successful from its illusions only when a collective recognises the effects. Along these lines is Vasarely’s mentality of “art for all”, that art should be disposed of its intellectual status and become accessible to a larger collective, the wider public. To summarise these two viewpoints, the production of optical art reaches its maximum potential when a community has had its views.

Determined to experiment with another shade combination other than black and white, I came across the interesting fact that the colour duo black and yellow stimulates the eye the most (hence it is used in many road signs). Adding to the different colour combination is the composition of the painting. Unlike others, they are centralised. Because of the focus and 3D effect, the work generates a spiral effect.

Experimenting with colour additions to black and white paintings without it overpowering the original contrast of the two shades. The concept of decentralisation also comes into character as the painting does not solely concentrate on an object or a specific section of the work. The intention is to invite the viewer’s gaze throughout the painting.